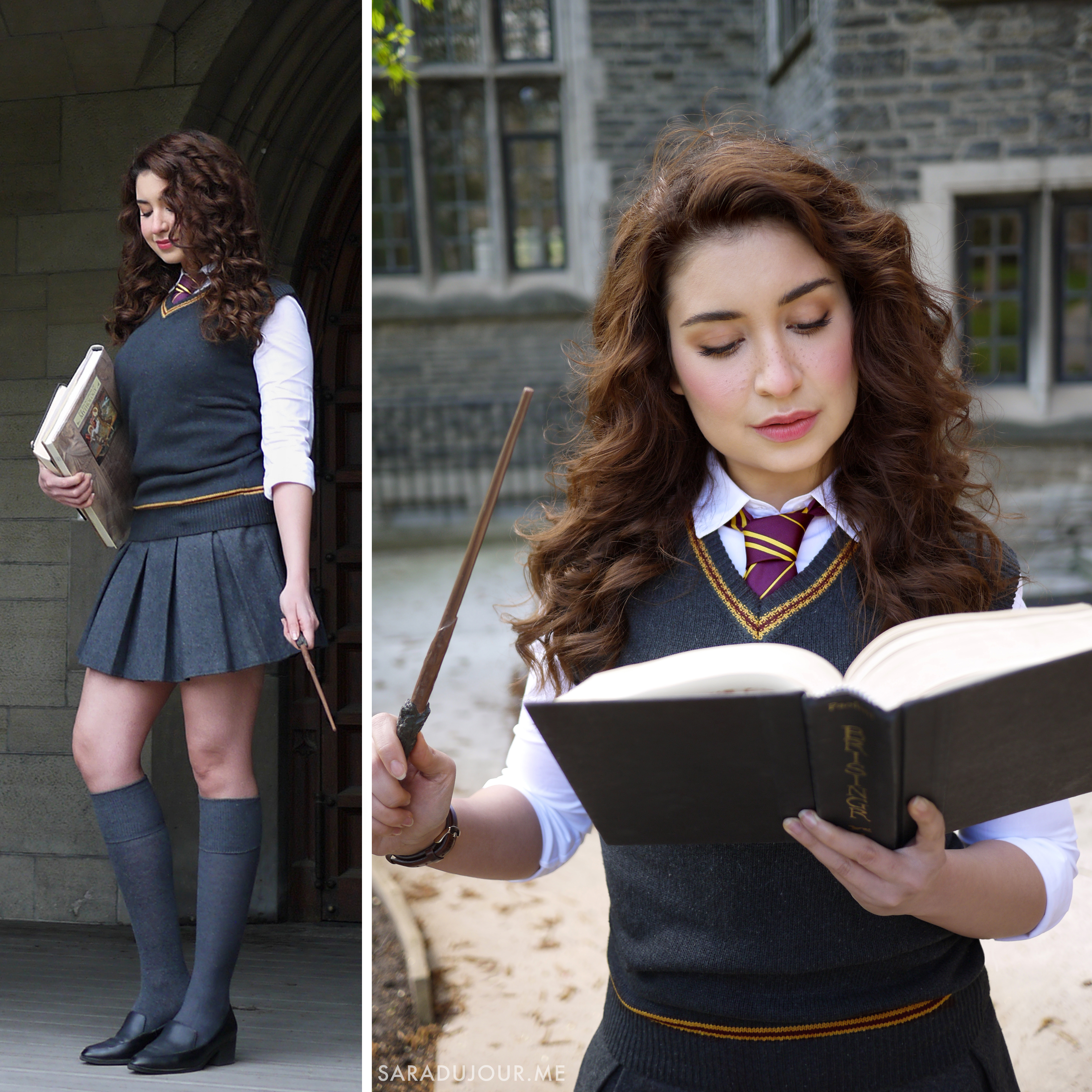 Hiiiiiii, welcome to my first full costume reveal of the year: a Hermione Granger cosplay! I’ve been sitting on this secret for months, so I’m thrilled to finally be able to share it with you. (That’s why my hair’s so big – it’s full of secrets.)

All my cosplays are fictional female characters that made a big impact on me, and Hermione is probably the reigning queen in that category. The Harry Potter books were released over the course of my childhood, so I really did grow up alongside Hermione.

I’ve always related to her a lot, and I think it’s largely thanks to Hermione (and Belle from Beauty and the Beast) that I was never embarrassed about being bookish, smart, and ambitious, during a time when little girls weren’t necessarily encouraged to be those things. 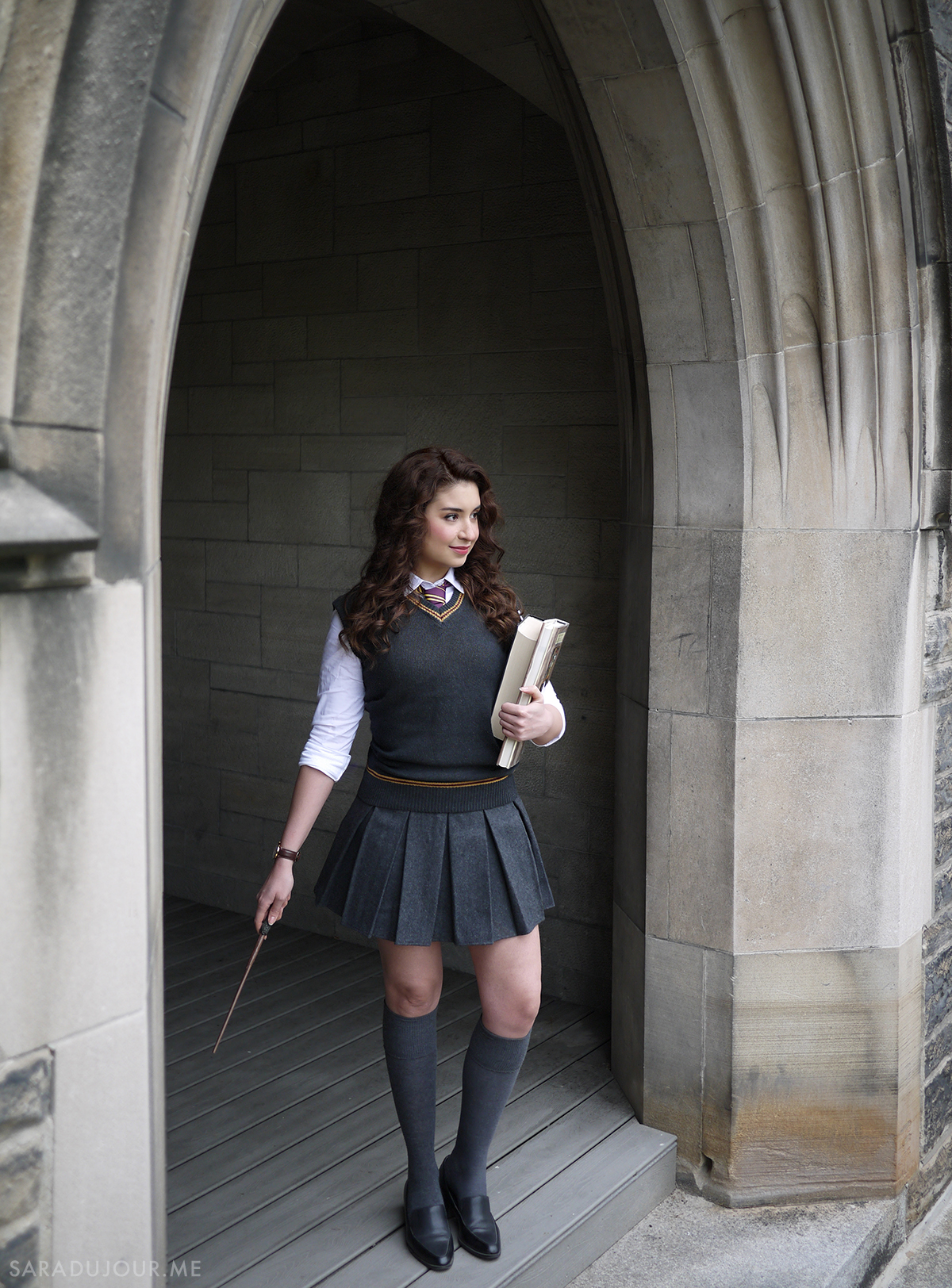 Like Hermione, I always had my hand up with the answers in class, and also like Hermione, that didn’t make me particularly popular among my peers at that time. But we were both lucky enough to eventually find our tribe of people, who love and accept us for the tightly-wound, high-achieving Type A personalities we are. (She had a time-turner, I have productivity tricks. She fought actual trolls, I sometimes fight internet trolls.)

****LISTEN TO THIS SONG FOR NOSTALGIA WHILE YOU READ THIS POST**** 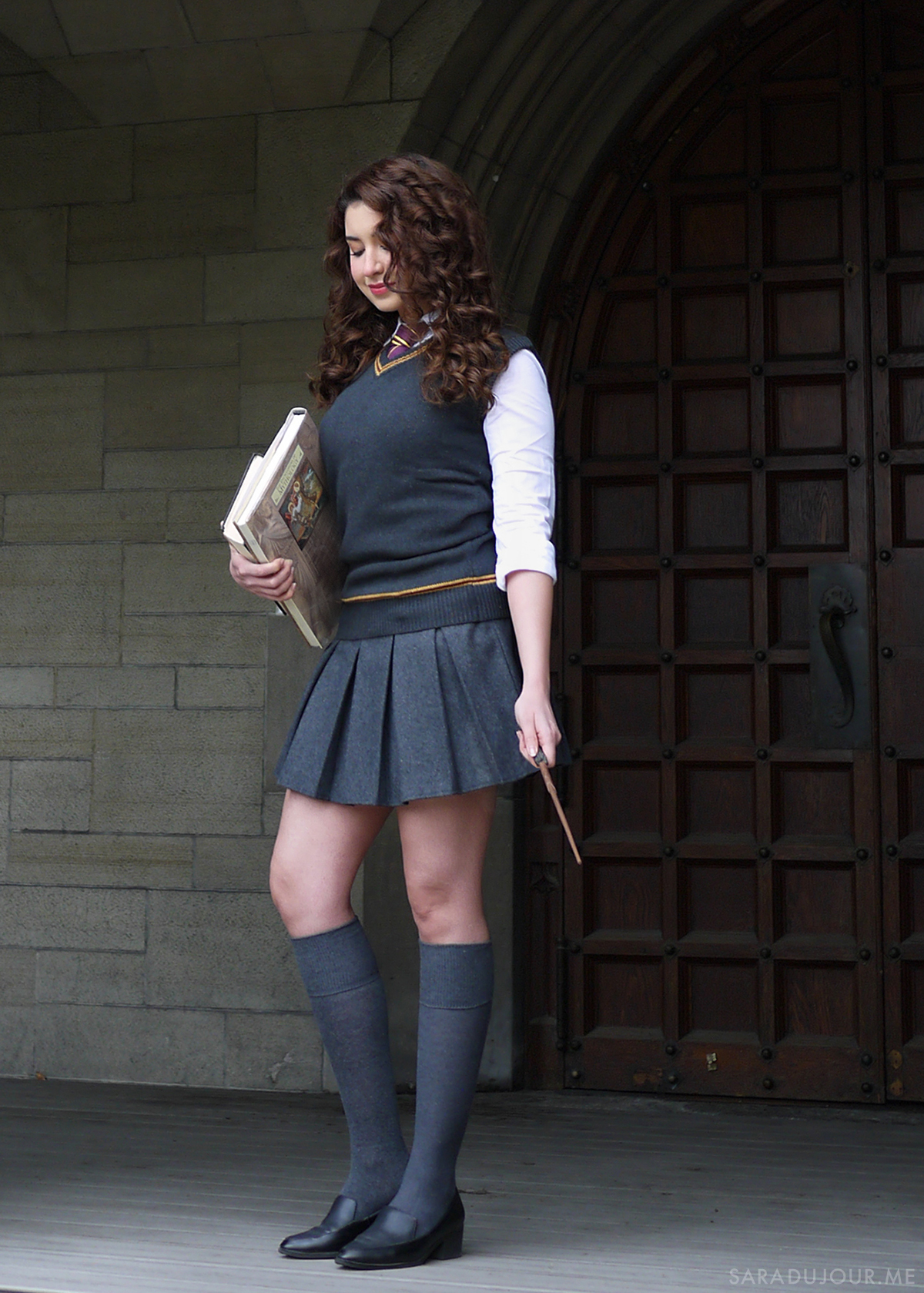 If you’ve been a super longtime reader of my blog – firstly, thank you, and secondly – you may remember that I dressed up as Hermione for Halloween a million years ago (back in 2012). I’m not even going to link that post, because my attempt was, quite frankly, pitiful, and Hermione deserved better. So here we are again.

But instead of doing Emma Watson’s movie Hermione, I wanted to do my own version of book Hermione – the way I imagined her while reading. 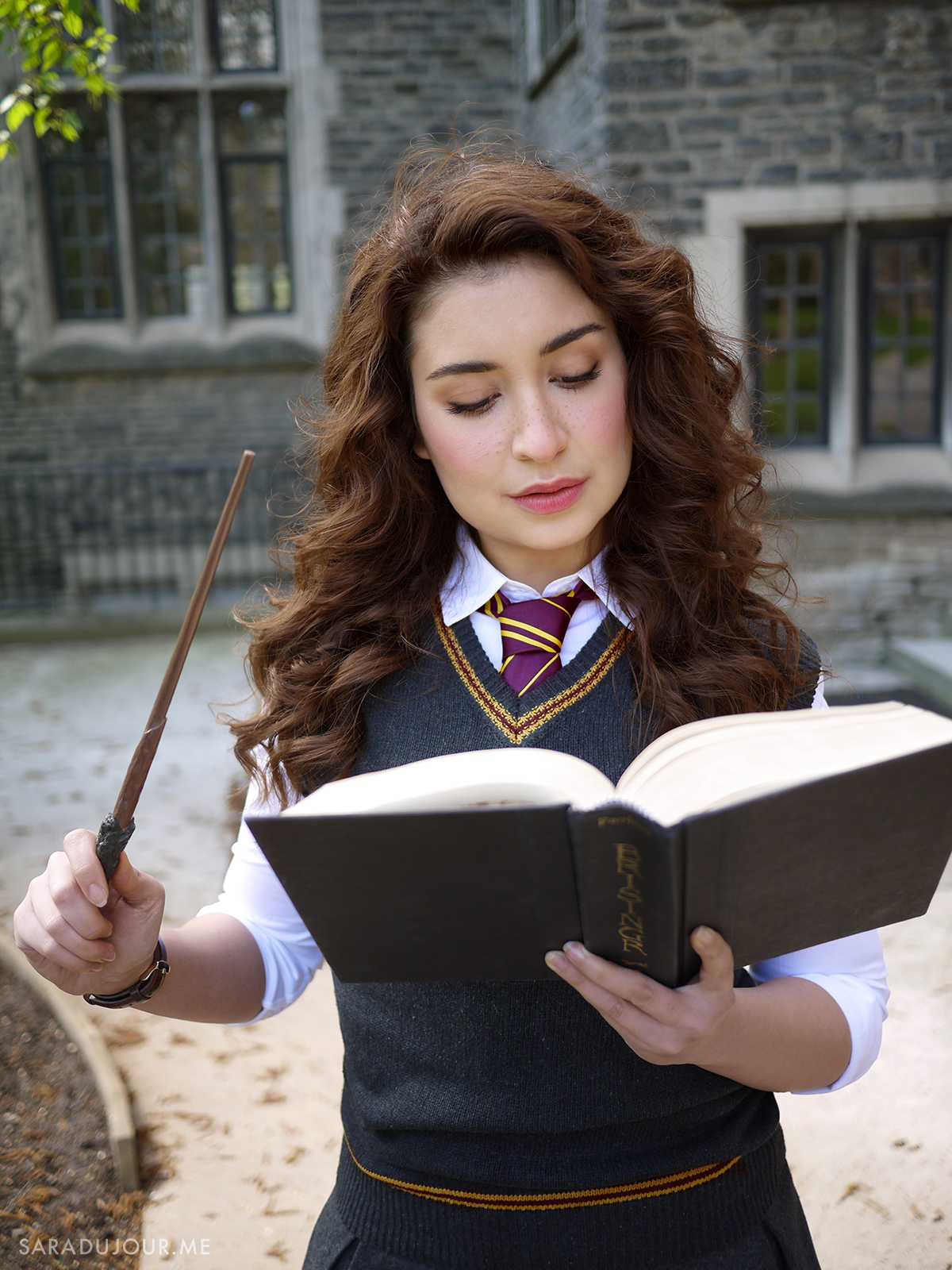 As per usual, I have a beef with the costumes in a movie adaptation of something I love, and I still bear a grudge against Alfonso Cuarón (director of the third Harry Potter movie) for making the executive decision that Hogwarts students wouldn’t wear uniforms all the time.

“Alfonso Cuarón had the idea to have Harry, Ron, and Hermione wear everyday clothes more often than their Hogwarts uniforms in order to show more of the characters’ personalities.” (Source) 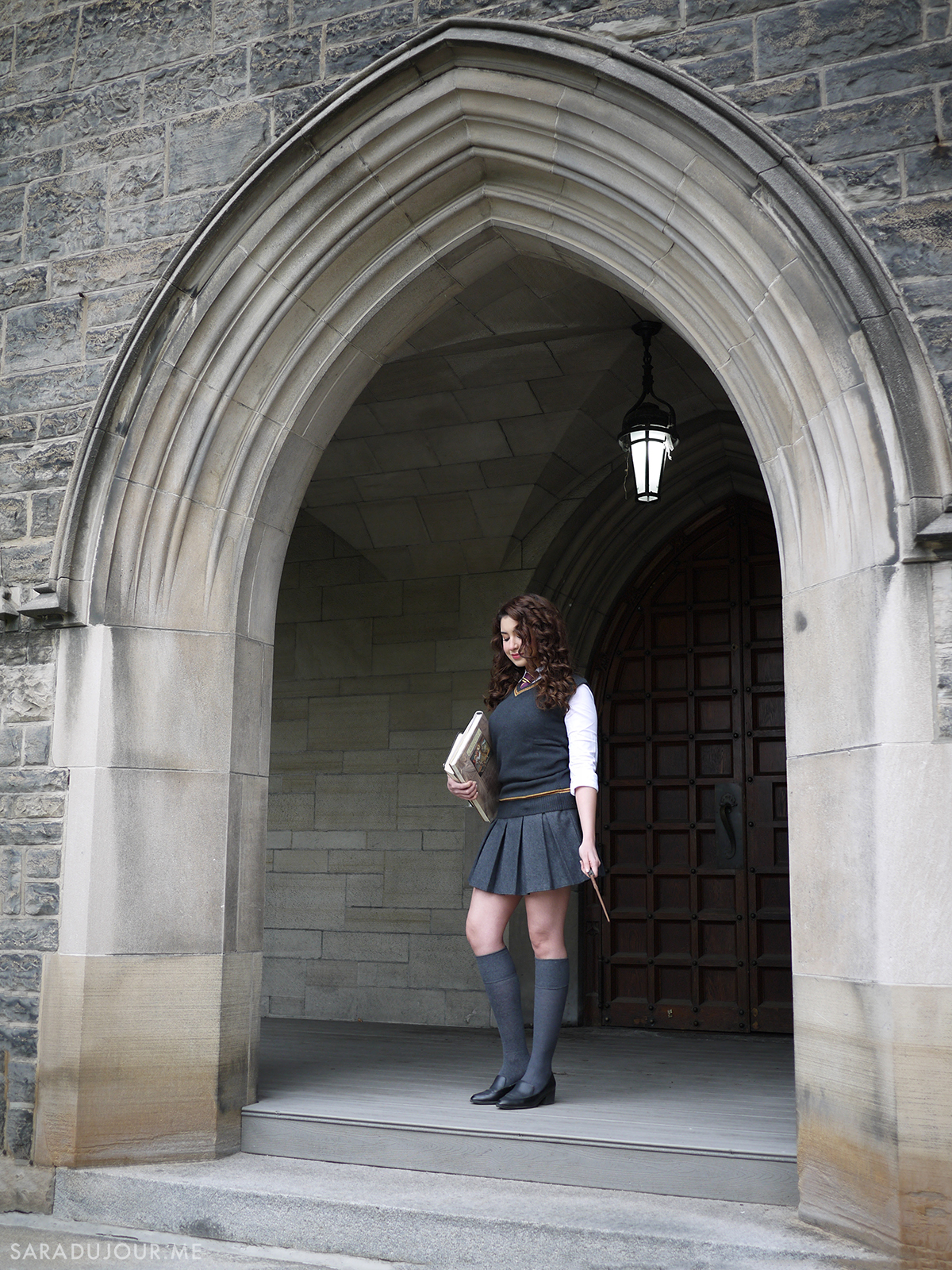 So anyway, here’s my version of Hermione Granger’s Hogwarts school uniform, with links in case you want to put together this Hermione costume yourself.

Since I’m a big ol’ geek and a longtime Harry Potter fan, I already had the wand and officially-licensed Gryffindor tie, plus a white collared shirt, knee-high socks, and the loafers (such a comfortable yet polished work shoe!). So all I needed to complete this Hogwarts uniform was the sweater vest and pleated skirt. 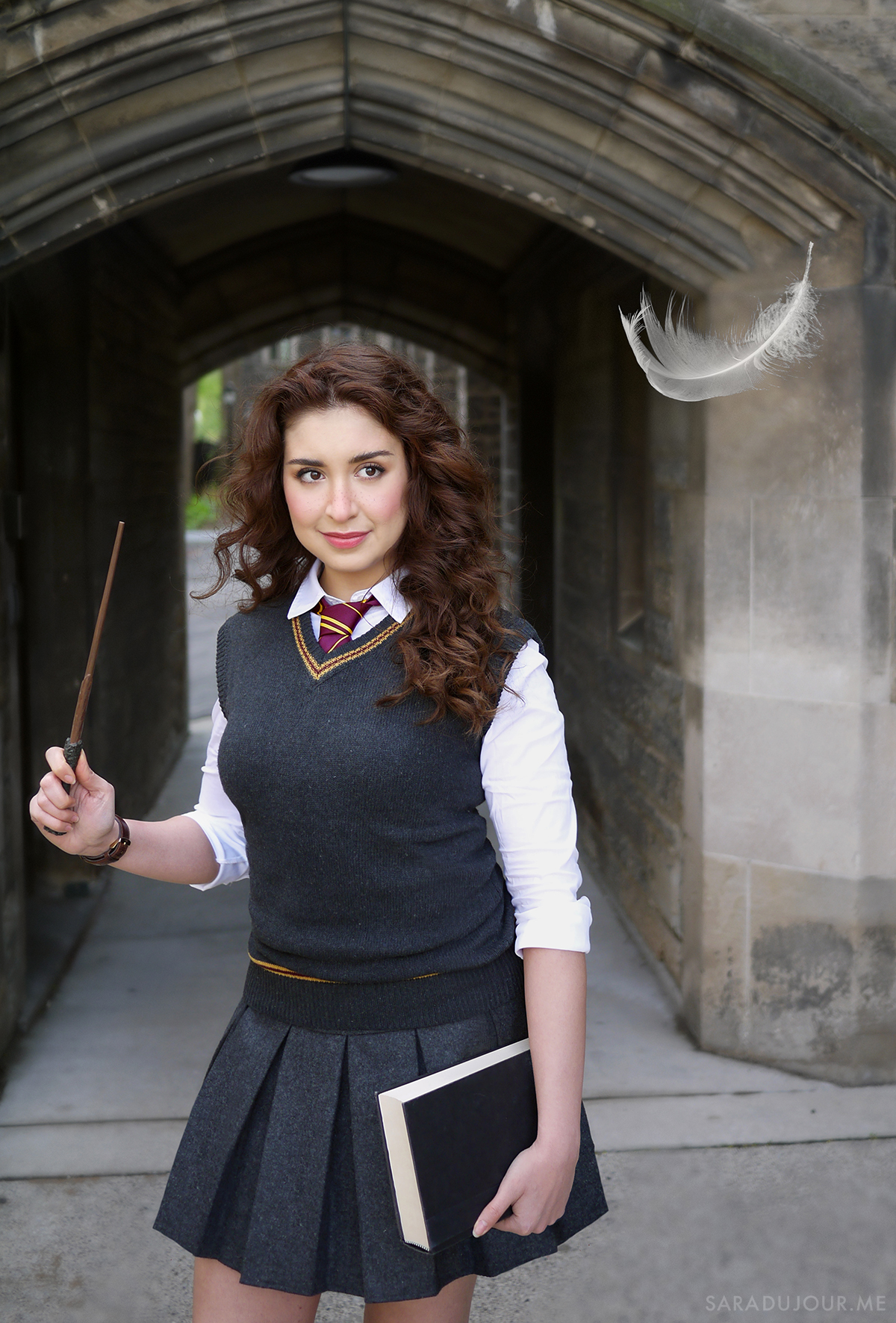 “You’re saying it wrong. It’s leviOsa, not leviosAAA.” – me, probably

A note on the sweater vest: the sizing is unisex, so bear that in mind. I’m 5’7″, usually a women’s size 4 or 6, and I ordered a size small. It was still too big on me – so much so I had to pin it in the back to make it work. If you’re around my size, I’d recommend their smallest size, XS. If you’re smaller than me, expect to pin it or get it taken in to get the fit right.

A note on the skirt: it’s meant to be worn high waisted, but I wanted it to be seem longer, so I sized up and wore it lower slung on my hips. This really only works with the sweater vest covering the top bit, otherwise it’ll look odd worn this way. 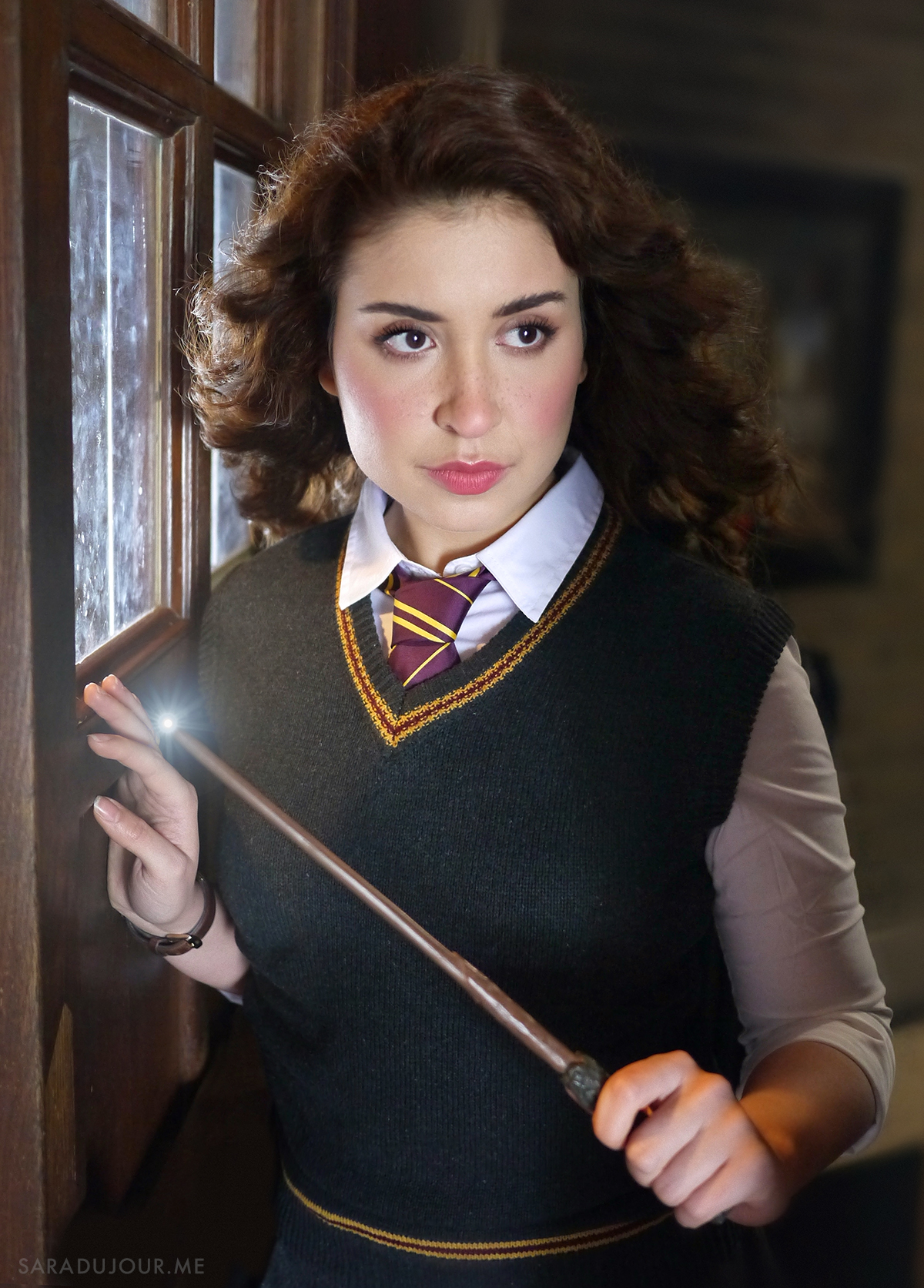 To fellow geeks with an eagle-eye – yes I know I’m using Harry’s wand instead of Hermione’s. I liked it better, and that’s the one I bought 7 years ago, okay!? Please let me live.

Alright, now that I’ve told you all about the Hermione Granger outfit, let’s dive into the Hermione hair and makeup details.

My hair is naturally in an undecided place between curly and wavy, with a fair bit of frizz (Hermione gets it), so after air-drying my hair, I touched up the curls on a .75″ curling iron, to even everything out. Once all the curls cooled off, I tousled them with my fingers to make them look more natural and less like Shirley-Temple.

(Hot take: Hermione was too blonde in the movies. Yeah I said it.) 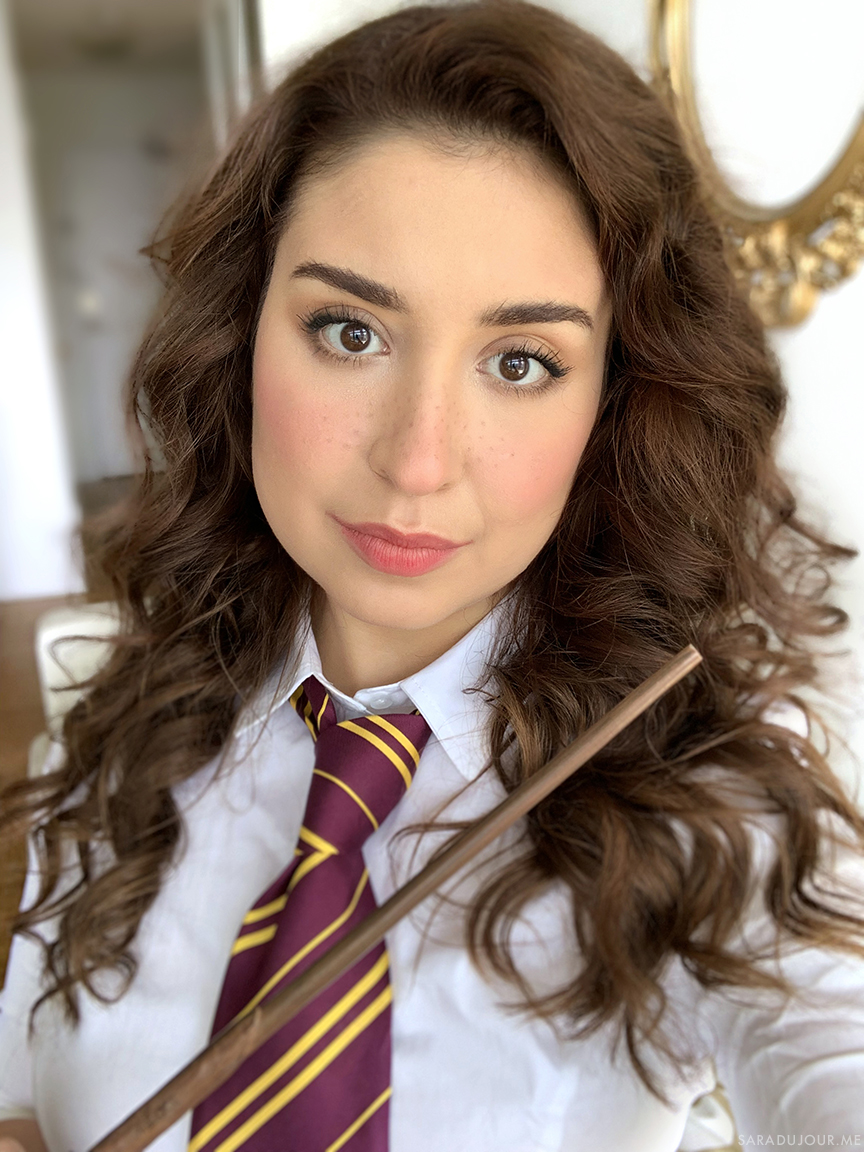 Even though my makeup for this cosplay is meant to look almost invisible, I’m wearing a lot of it. I also didn’t want to just look like myself on a regular day, so I applied some subtle makeup magic to transform my appearance a bit. (Who needs polyjuice potion when you’ve got makeup skills?)

As a muggle-born witch, Hermione has a bit of a mixed background. So do I! I’m half white and half Arabic, so I used a LOT of a powder-pink blush to combat my olive-undertones and try to look like an English rose. I also placed the blush completely differently than where I do for my everyday makeup. Instead of applying it along my cheekbones, I focused it on the apples of my cheeks, and across the bridge of my nose. I also applied blush to the very tip of my nose, to create a more flushed, youthful appearance.

Even though book Hermione isn’t described to have freckles, I wanted to add some because 1) I’d never done fake freckles before, 2) I wanted to change up my appearance, and 3) as a little nod to Emma Watson’s movie Hermione, who does have freckles. 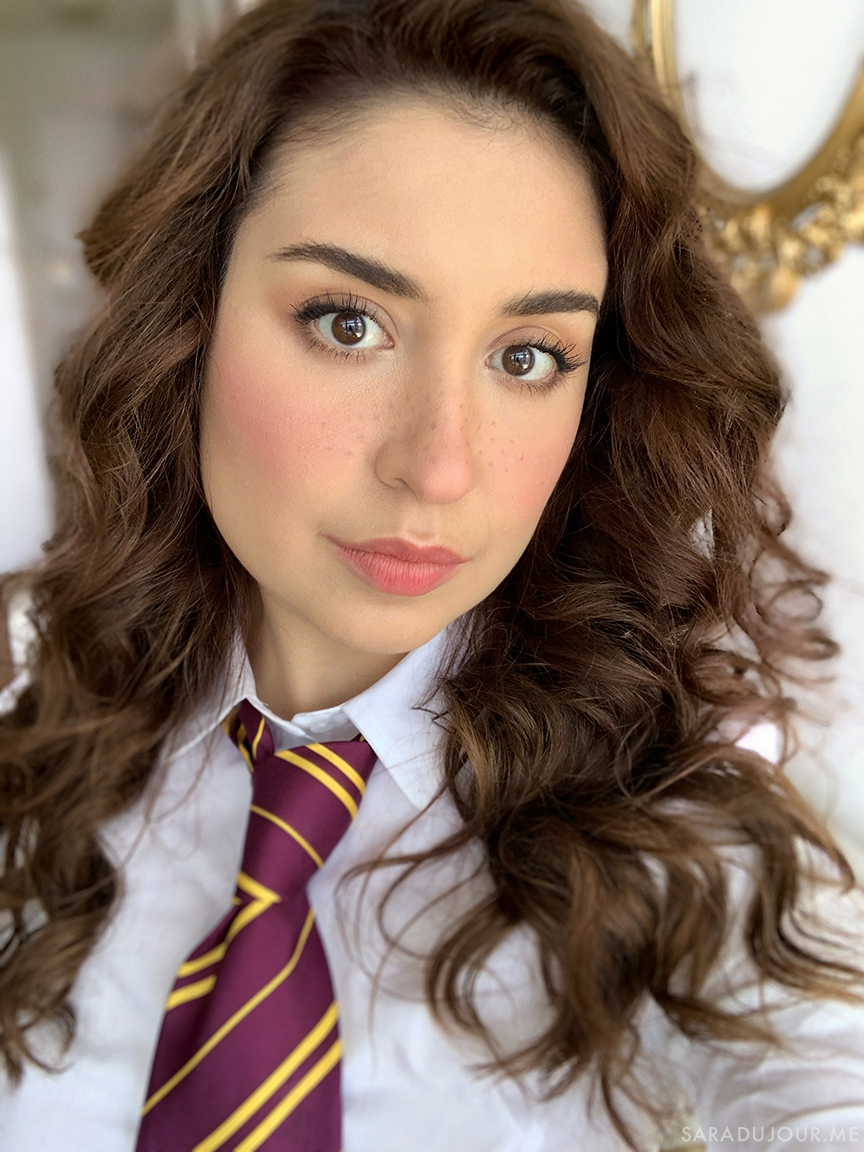 I kept my eye makeup really natural, using the tiniest bit of a matte warm brown eyeshadow to add dimension to my crease, darkening my top lash line with liner and applying mascara to my top and bottom lashes.

On my lips, I’m wearing a touch of Glossier’s Generation G lipstick in Crush. (Read my full review and get my promo code for Glossier here.) To make my lips seem wider and thinner, I used a pinky-nude lip liner to extend the outer corners of my mouth, and focused my lip colour on the center of my lips, avoiding my natural lip line. 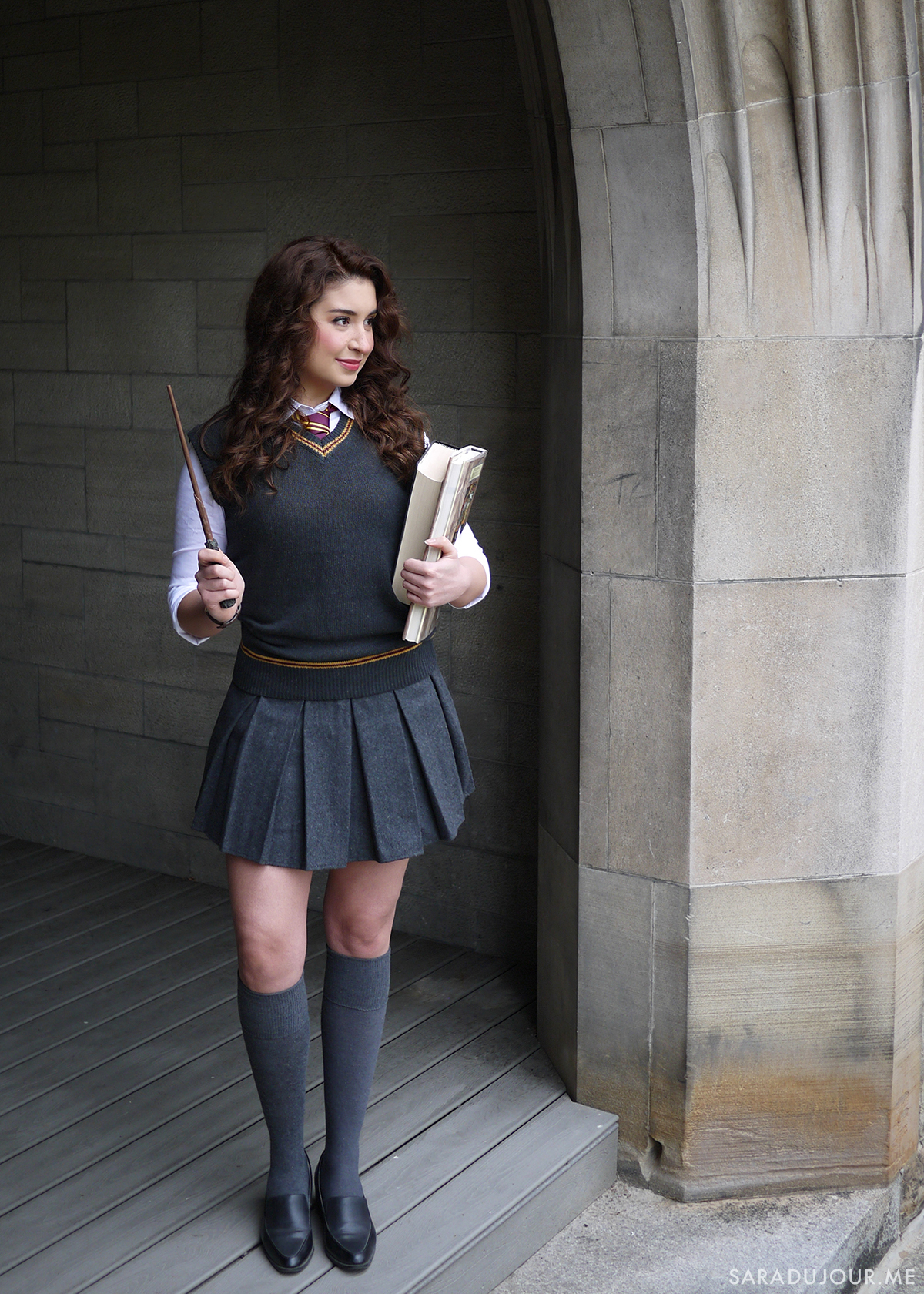 And that’s a wrap on the brightest witch of her age! I had so much fun doing this cosplay, and it was one of the most comfortable costumes to wear. Let me know what your Hogwarts house is below, and don’t forget to pin this post for Halloween costume ideas later!

I’ve got to get back to reading Hogwarts, A History.