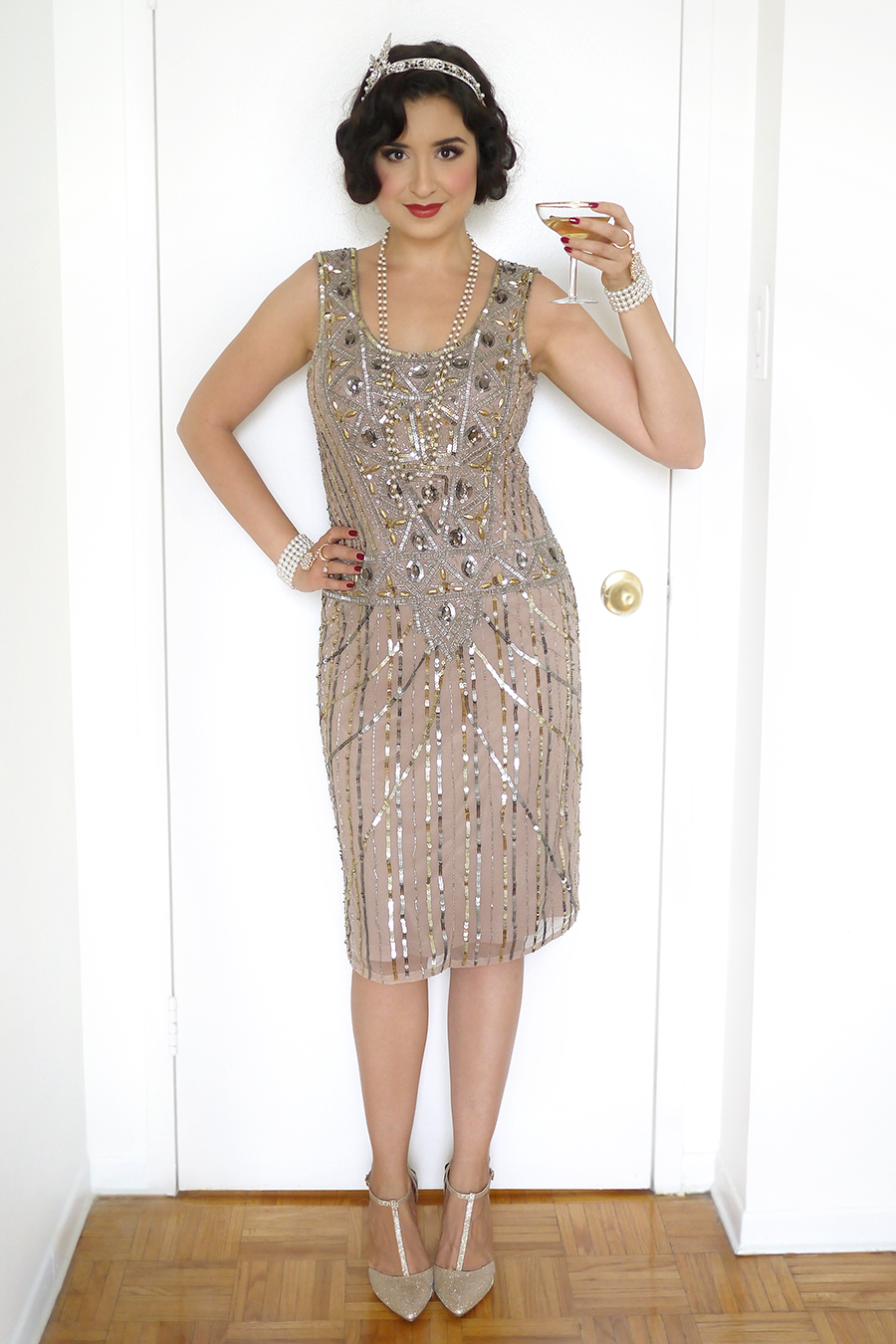 Hello again! I took another little trip through time and thought I’d share it with you! My awesome, fellow-costume-party-enthusiast friend Katya had a birthday over the weekend, which meant: another fabulous theme party. This time? The roaring twenties.

Since I had already done a 1920s traditional flapper costume for a Christmas party a few years ago, I wanted to do something different this time around. Instead of going super dark and vampy, I took cues from Baz Luhrmann’s version of The Great Gatsby film – specifically, Daisy Buchanan’s party costume. 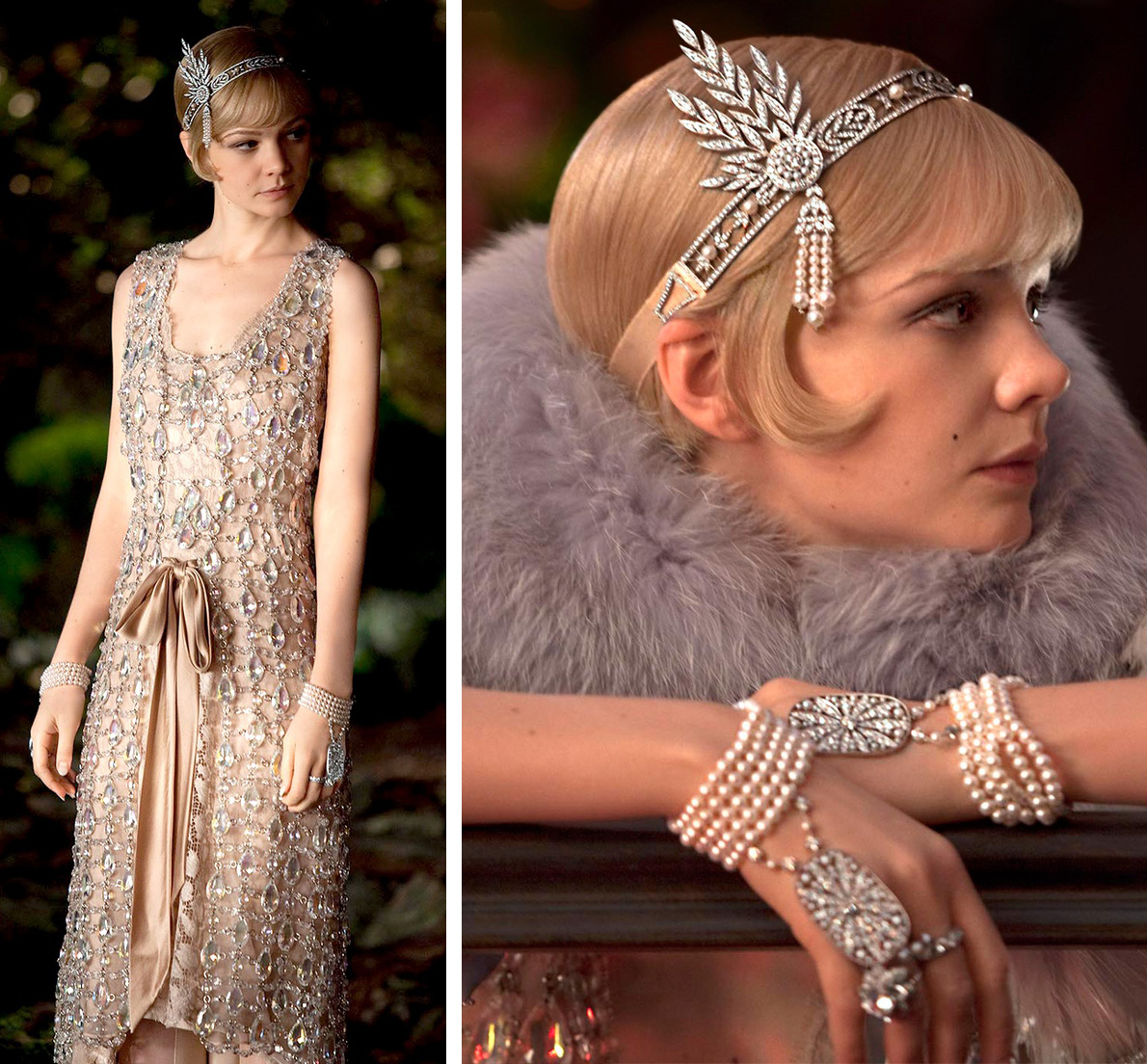 In The Great Gatsby, Daisy is a very upper-class woman, so her outfits are always highly adorned, displaying her wealth in full view with diamonds, pearls, and jewels. Now, I don’t have a rich asshole husband, so I can’t afford diamonds – but you know what ya girl can afford? RHINESTONES AND AMAZON PRIME.

So that’s what I did. #IndependentWoman 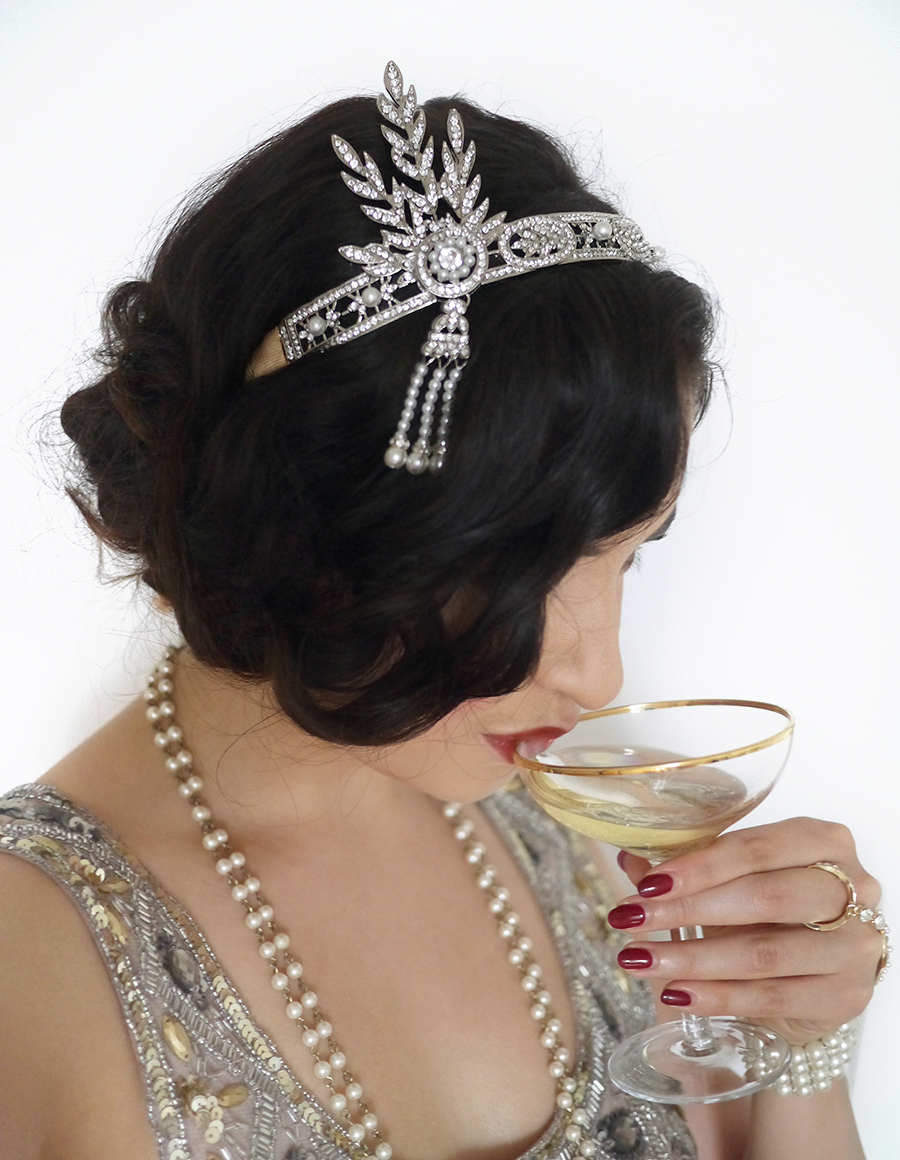 Let’s start with Daisy’s gorgeous diamond headpiece. You’d be amazed how many replicas are out there – all over Etsy and Amazon. After doing a lot of research, comparing, and studying reference photos from the Gatsby film, I picked this one. It’s one of the more affordable options, too! (It’s under $20 – including shipping to Canada.)

Gotta save where you can – I’m still working on getting together that West Egg money. 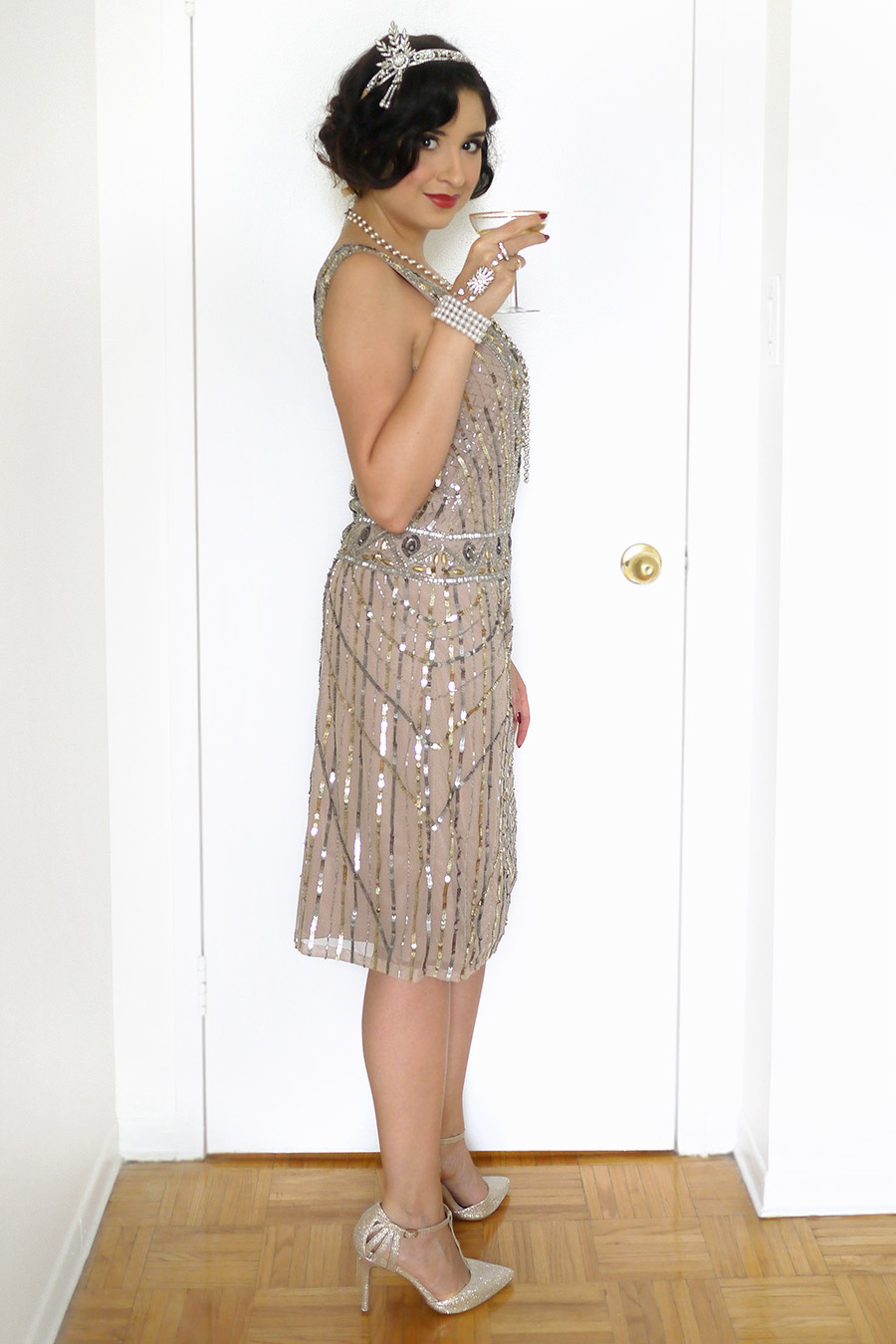 I bought this 1920s sequinned dress from Modcloth for an event over 3 years ago, so unfortunately I can’t link you to this exact one, but Amazon has a wide selection of beautiful 1920s flapper dresses. This one is quite similar, and at a much happier price point. 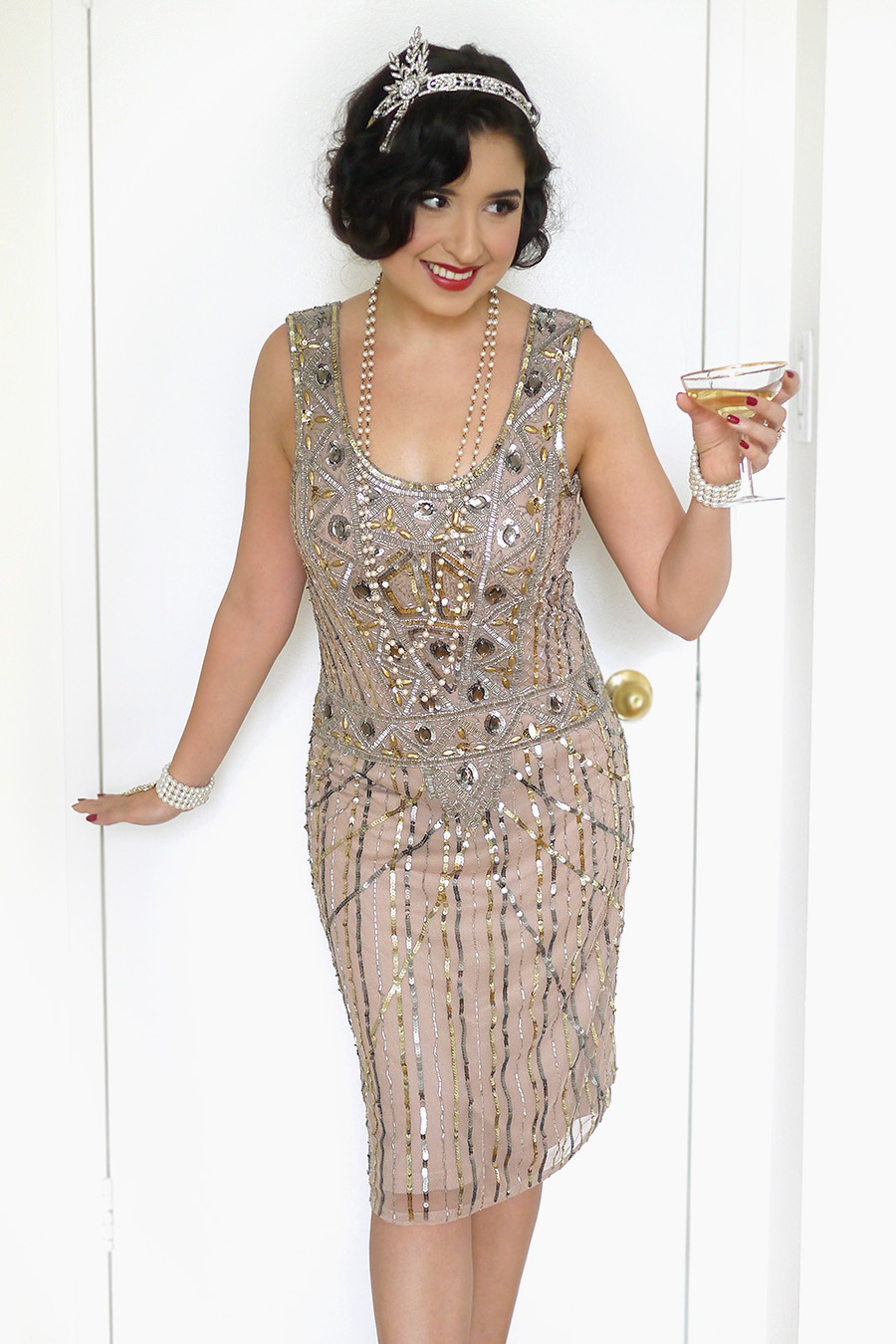 Even though Daisy’s party outfit didn’t include a pearl necklace, I felt it really completed the look. As for Daisy’s Great Gatsby pearl bracelet and ring combos, Amazon *delivered* yet again. These are an almost exact replica of the movie’s! 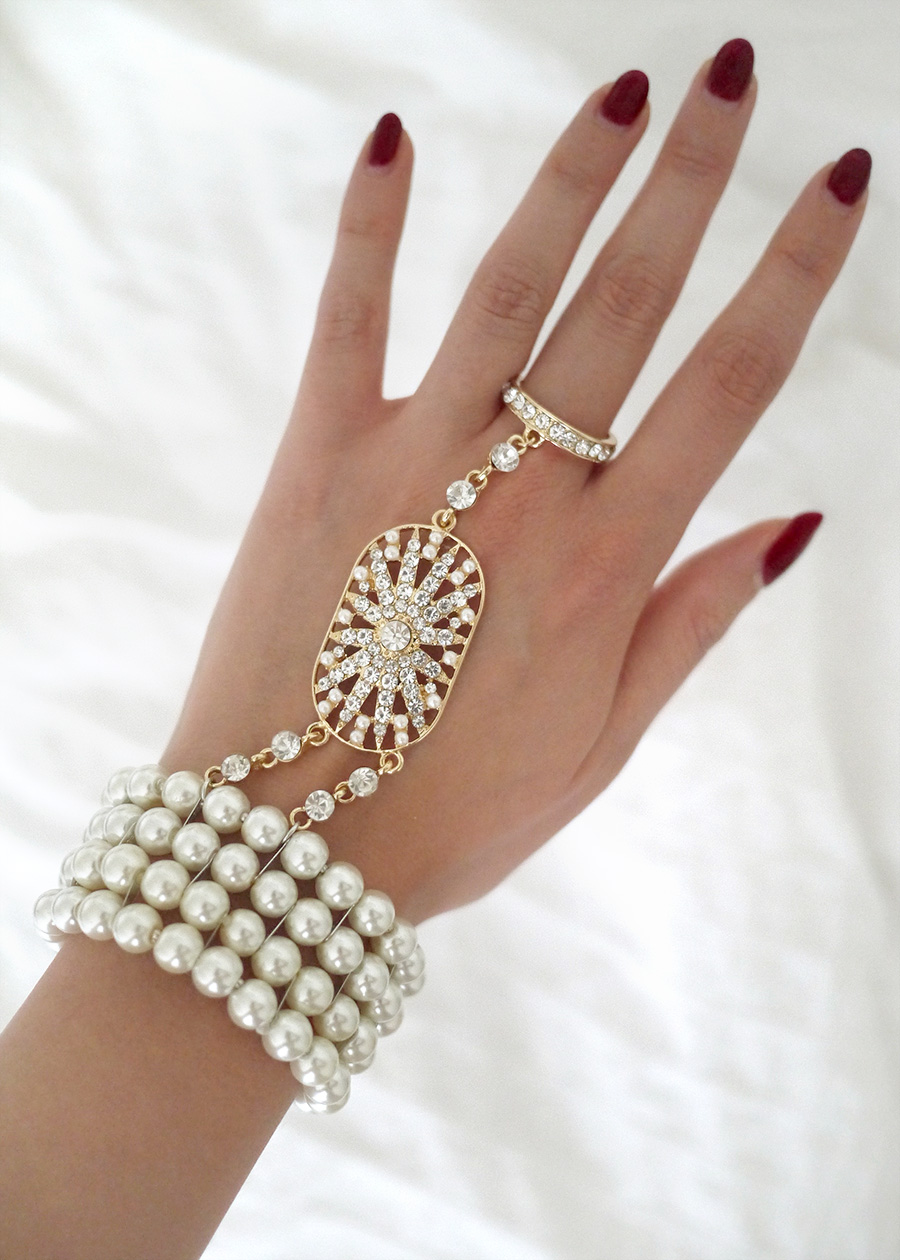 When it came to shoes, I had a bit of a dilemma: go more authentic, or choose a pair of heels I would likely get more wear out of? I went with the latter.

While an authentic 1920s shoe would be a much lower, thicker heel and a rounder toe, I thought these sparkly champagne heels were 1920s-inspired with a modern twist. The T-strap and art-deco cut outs kept it on theme, while the more elegant, contemporary silhouette meant I could wear them again and again. 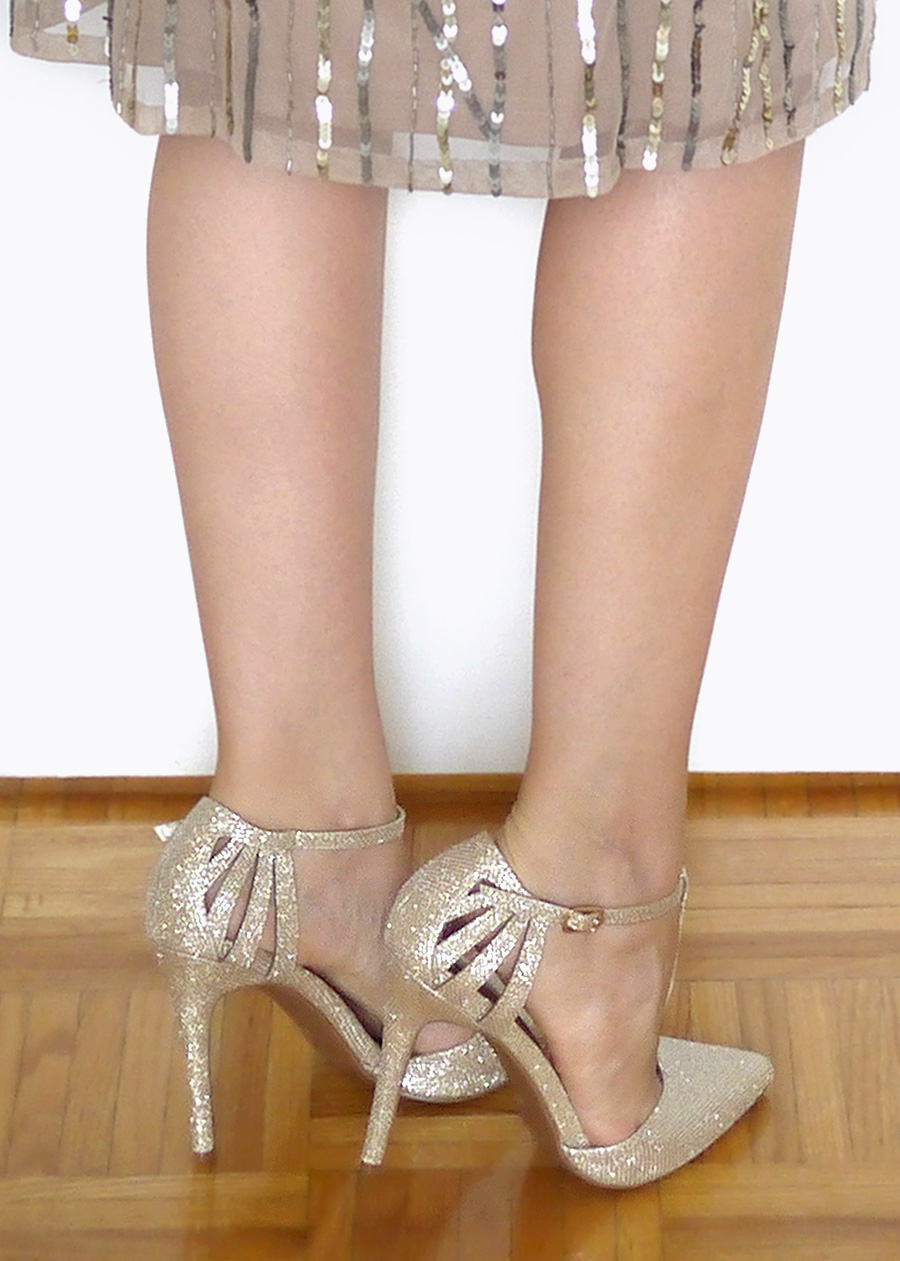 And they were fairly comfortable, too! They stayed on my feet all the way through the night, despite all the champagne and bathtub gin. 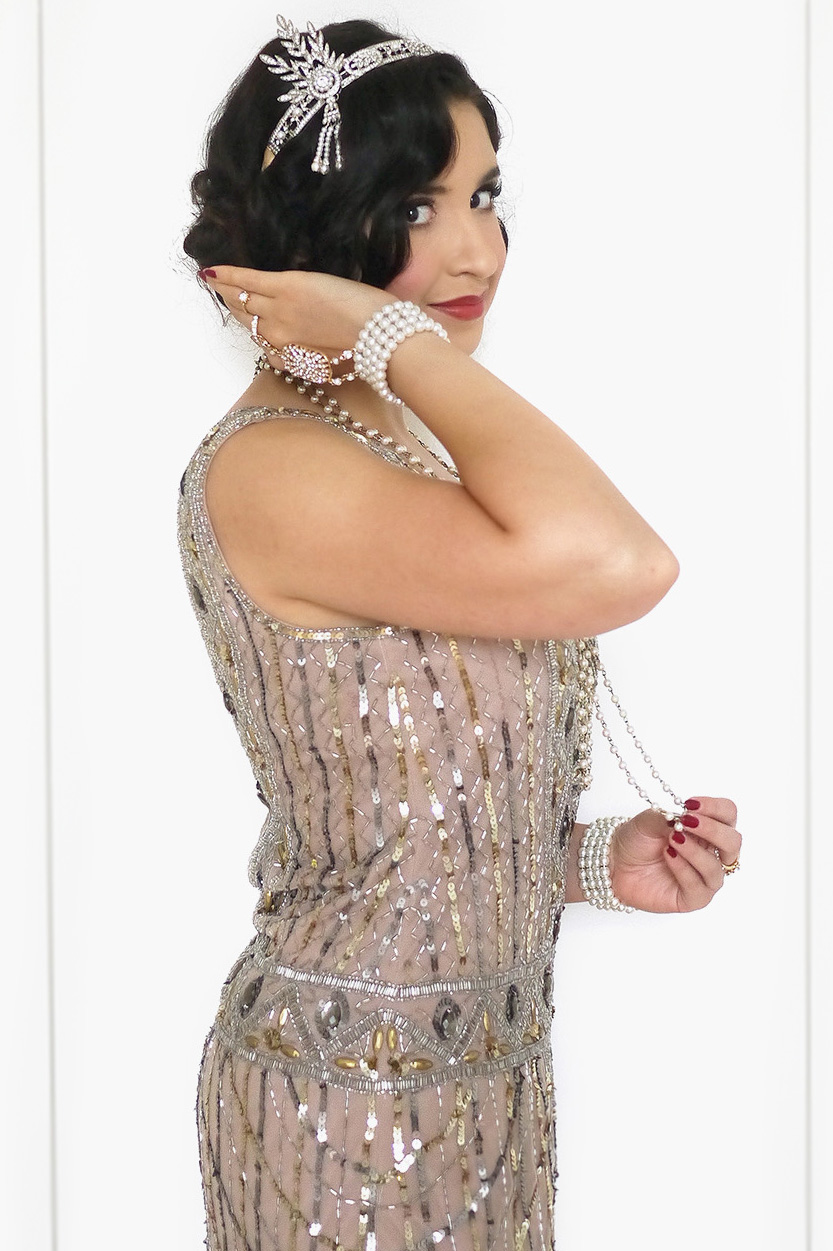 Now let’s talk beauty. 1920s hair IS HARD. Since I’m not a blonde with a l’il bob, replicating Carey Mulligan’s Gatsby look obviously was not going to happen for me. So I chose another classic hairstyle from the era: finger waves. I’ve only ever attempted this twice before, and sadly my 1 am hair trial the night before came out better than the day of, but what can you do?

Essentially I curled my whole head with a 3/4 inch curling iron (and let the curls cool pinned to my head), separated the front section on either side to be finger waved and gelled into a solid structure, and tucked/pinned the remaining hair (teased and hair-sprayed) into the headpiece’s ribbon, with a few loose curls pinned kind of randomly to create the appearance of a faux-curly-bob.

I’m not even going to attempt to explain how to do finger waves with words, but I recommend this tutorial. You will quickly notice mine didn’t come out nearly as good as this amazingly talented woman, lmao. It’s hard!! I told you!

For makeup, Carey’s Daisy makeup is SUPER light, to go with her fair complexion. Since I have very dark hair, I felt bolder makeup made more sense – though like I mentioned earlier, I didn’t want to go completely flapper vamp. So instead of a dark grey or black intense smokey eye, I did a medium brown smokey eye, shaped to enhance the roundness of my eyes. To that I added a very thin line of eyeliner along my top lashes – just enough to conceal the band of false eyelashes, and applied mascara to the top and bottom.

Along with that, I extended my natural eyebrows with brow pencil, à la twenties, applied a generous amount of powder pink blush to the centres of my cheeks, and used a reddish-burgundy lipstick to shape my lips, accenting the cupid’s bow and narrowing my lower lip.

And that’s all she wrote! I now give you the *green light* to start guessing this year’s Halloween costume in the comments. ;)

Follow me on instagram to see snapshots from the actual party, plus a video of the hair and makeup.